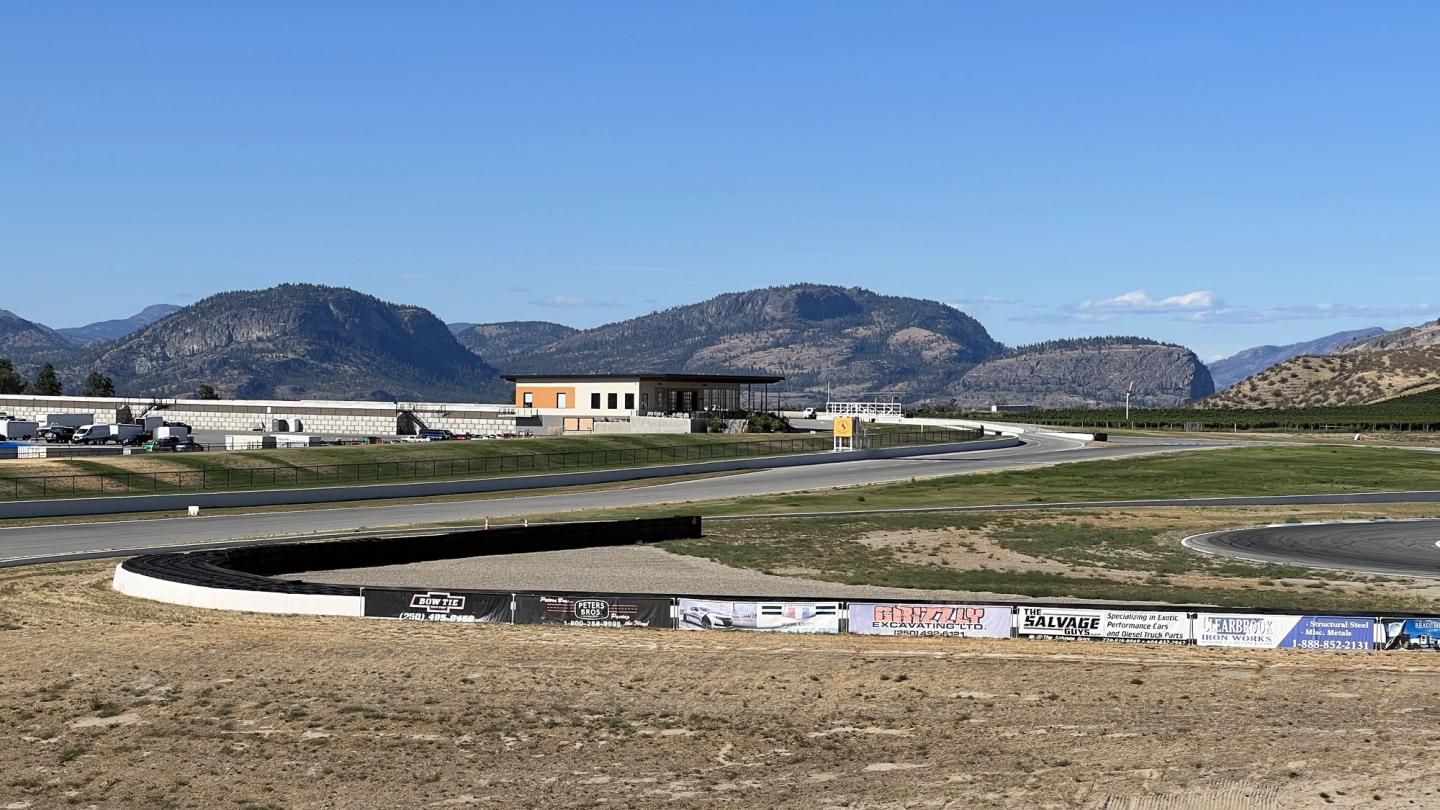 For years now, I’ve yearned to drive on just one track in the Pacific Northwest. It’s a track all my fellow track rats talk about, though few have driven. It’s reputed to be long and technical and a bit exclusive, offering a very limited number of days to “outside groups.” It’s complicated to book, both because of the logistics and the numbers: the costs are such that you’ve got to sign up a good number of drivers. And while it’s technically in the PNW, it’s a bit of a hike, across a mountain range and an international border. It’s Area 27, what I consider to be the holy grail of Northwest race tracks. 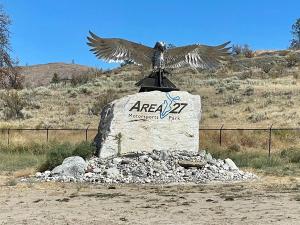 An eagle welcomes you to Area 27
Area 27, seen from the public viewing area

Audi Club NW booked the track two years ago ... only to have COVID slam shut the borders. But they waited patiently and worked with the team at Area 27 to defer the event, called Ausflug (it’s German for “excursion”), to early September, and I leapt to grab a seat.

Area 27 sits not far outside Oliver, British Columbia, in the province’s noted wine-growing region, a spectacularly beautiful area that looks like a cross between eastern Washington and Napa Valley. The track was designed by former Formula 1 driver Jacques Villeneuve, working with track builder Trevor Seibert and president and general manager Bill Drossos, and opened for action on August 30, 2016.

It’s hard to imagine a more beautiful setting for a track. You approach the track through a sea of vineyards, and vines crowd the edge of the facilities on the valley side. On the other side lie sun-browned hills, forming a kind of low bowl around the track. The facilities at Area 27 are first rate, with a swanky clubhouse that feels like you’ve landed in a millionaire’s private playground. Oh, that’s right, you have. Nearby Oliver is charming in a uniquely Canadian way: there are no national chains, no exclusive high-end shops, just family-owned restaurants, a couple neat hotels, and all kinds of AirBNBs for rent nearby. Our lodging, in a guesthouse at a winery, looked right over the grape vines. 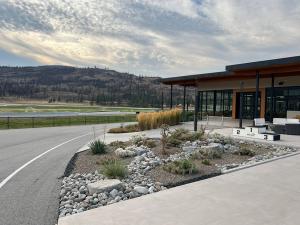 The clubhouse at Area 27

But really, who cares about pretty scenery and lodging when there’s this kind of track nearby!

Of the 10 tracks I’ve driven on in my life, Area 27 stands out as the most challenging and engaging. Its three miles of track provides 16 turns and ample elevation change. It offers such an exhilarating mix of driving challenges: sweeping turns, increasing and decreasing radius corners, on-camber and off-camber sections, banking, elevation changes, and several “blind” corners, both up and downhill.

Studying the track layout and videos in advance, I expected the course to be “technical” ... but how do you really know what that means until you get on the track? The Audi Club coaches had wisely led us through three moderately paced warm-up laps before setting us loose, but I still wasn’t ready. Cresting the hill toward the “blind” turn nine on my first hot lap, I knew the track went left, but I sure as hell wasn’t ready for just how sharp that left was, nor for the way the off-camber track beckoned me in the wrong direction. I turned in but not enough, and quickly found myself running out of track and into the surrounding dirt. Thump, thump I went, four wheels off in a cloud of dust. I was red-faced and a bit shaken, but it was easy to pull back onto the track (a testament to good track design) and my nerves had already begun to settle when I exited the track to account for my sins to the track marshal, Josh.

Josh laughed when I told him where I’d gone off. “You and three others!” he laughed. “That one always throws people off.” He checked my car and sent me back out. Experience slapped me on the back of the helmet: “Start slowly and learn the track, dumbass.”

Admonished by my driving conscience (he’s a bit brusque, with a voice that sounds like Steve Libby), I then enjoyed two long days of the most enjoyable driving of my life. This track was endlessly interesting, with so many puzzles to solve across every part of the track. I experimented with endless variations in terms of corner entry speed and placement, braking points, etc. ... all the little nuances that make it possible to drive around and around a track for several days without ever losing interest.

One of the best parts about this particular track event was being able to share the track with several other M2 drivers, notably Shiv Pal Singh and Brent Madison, both considerably more experienced than me. (And hell, Chris Harris, who drove an Aston Martin as fast as I’d ever seen.) Brent and I drove in the same sessions, and we took turns leading and following, learning both from the track and from each other. Shiv was in the other group, so we chewed over his experience during the breaks. Here are “hot laps” from both of them to give you an idea of the experience. I didn’t record any laps, but I can tell you: they are both smoother and faster than me.

It’s not just the track and the car that makes a track day: it’s also the people. This was my first trip with the Audi Club, but they welcomed me and my wife with open arms. There’s a camaraderie at the track in general, no matter which group you go with, but these folks just seemed especially warm and generous with their advice (and willingness to share tools!). And while the trip was sponsored by the Audi Club, there were oodles of BMWs and Porsches as well. 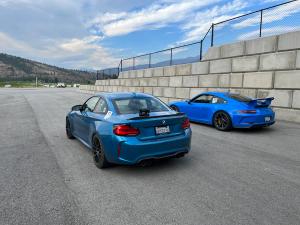 My car, waiting in the paddock
German cars everywhere you look ...

One of the other joys about Area 27 is getting there and back. From the greater Seattle area you have several choices that keep you away from the mind-numbing interstates for the most part. We took Highway 2 over the mountains on the way up, then wove our way up Highway 97 to our border crossing at Osoyoos. All in all a lovely drive. Taking Highway 20—the North Cascades Highway—would usually be another great choice, but the state DOT warned of chip sealing on that road, with long delays and loose debris, so we were happy to avoid that route. Our return trip took us north, then south, then north, then south—but always west—along BC Highway 3, until we dropped into the backroad path down Highway 9. (Did I mention I don’t like interstates?) Every one of these roads provides a lot of joy in a driver’s car.

Once you’ve found the holy grail—as I did on this weekend—you start to wonder what’s next, and that’s what I considered on the long drive home. Perhaps it’s time to venture further south, to the California tracks ... 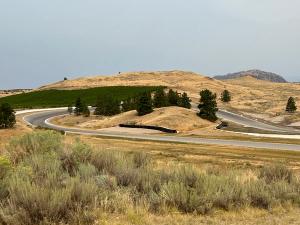 The view of Turn 7 with smoke keeping the temperatures down 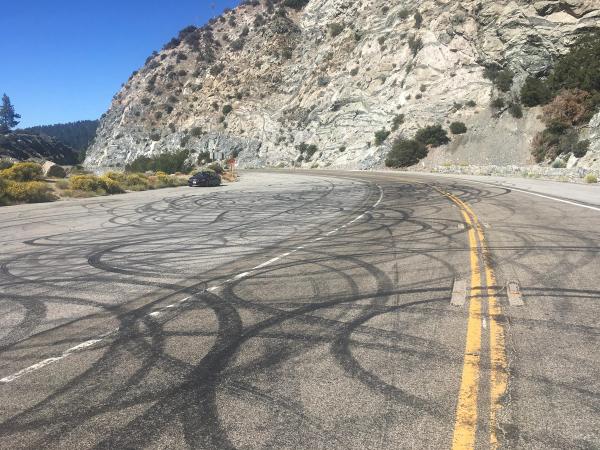