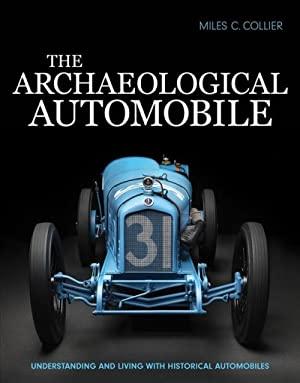 This is a very unusual book. It looks like a coffee table book with large format, beautiful color photography, and weighs four and a half pounds. But it reads like a college textbook for a difficult course. It retails for $150 and is probably the most influential book ever in terms of affecting the automobile hobby. Thus, it will likely become a standard work for the old car hobby, but that doesn’t mean it is an easy read, as it is not. Still, reading it was a pleasant labor, one that included frequent consultations of a dictionary. The author is Miles C. Collier.

The Foreword, by Michael Shanks, an archaeologist and professor of classics at Stanford University, makes the point of how important the automobile is to our society. Viewing automobiles as historical artifacts, is a new approach. The connection between ancient archaeology and automobiles is connoisseurship.

Compared to its world-shaping influence and importance, the automobile is remarkably underrepresented in general scholarship. It is as if the automobile has not yet been made a legitimate topic to focus on. This book aims to change that. Not only are automobiles remarkably rich artifacts and social and cultural change agents, but also one of the most universal embodiments of memories from the past.

For background, the author chronicles the history of human mobility and the development of the automobile, after 6,000 years of humans using horses to get around. At the beginning, automobiles were seen as a way to clean up urban areas, which were being fouled by the keeping or so many horses in a confined area.

With the widespread use of automobiles in the early 20th century, our civilization was transformed. It was a remarkably swift transformation. The U.S. and European concept of the automobile diverged in the early 1900s with Europe viewing cars as luxury goods and Americans aiming for mass production and affordable pricing.

Car culture and racing were not far behind the introduction of the automobile. Now, almost 140 years later, automobiles can be viewed as archaeological objects. While the practice with old car hobbyists has largely been to ‘restore’ old cars to a ‘like-new’ state, the author’s purpose with this book is to look at old cars as significant artifacts. Restoration destroys the archeological evidence found in the artifact and, generally, is to be avoided in the author’s view.

This is interesting, because this has been the view with most antiques and art for ages. But cars have been treated differently. Most old car owners want to be able to drive and enjoy their vintage automobile, with reasonable reliability. Perhaps the most historically significant old cars deserve this treatment, but I can’t see preserving the wear and tear of neglect or poor maintenance, just because it preserves the history of the vehicle.

I mentioned that the book is like a textbook, quite difficult to read because of the sophisticated concepts presented and the challenging vocabulary used. An example: “Emphasizing the ordinary is also based on an aversion to a cultural determinism that ascribes subjective value, whether aesthetic, cultural, or historical, only to those things seen to be worthy by our culture.” Much of the book, maybe most, reads like this. You’ve been warned.

The automobile burst on the scene in the late 19th century and was technologically mature by the 1930s. After that, it evolved incrementally. Current developments may lead to another great leap forward. The combination of autonomous driving, alternative power, and connectedness could lead to a major change comparable to the first introduction of automobiles.

So, should the history of automobiles be preserved? Of course, on a limited basis. In a hundred more years will people care about cars from the 1920s and 1930s? Maybe about as much as horses pulling carriages are an area of interest for us today.

I’m glad I read the book. It isn’t a book I can recommend, simply because it is difficult to read. I do have twelve pages of reading notes I’m happy to share with you, if you’re interested. Hit reply and let me know if you’d like to receive a copy. Reading my notes will take a lot less time than this almost 400-page book.