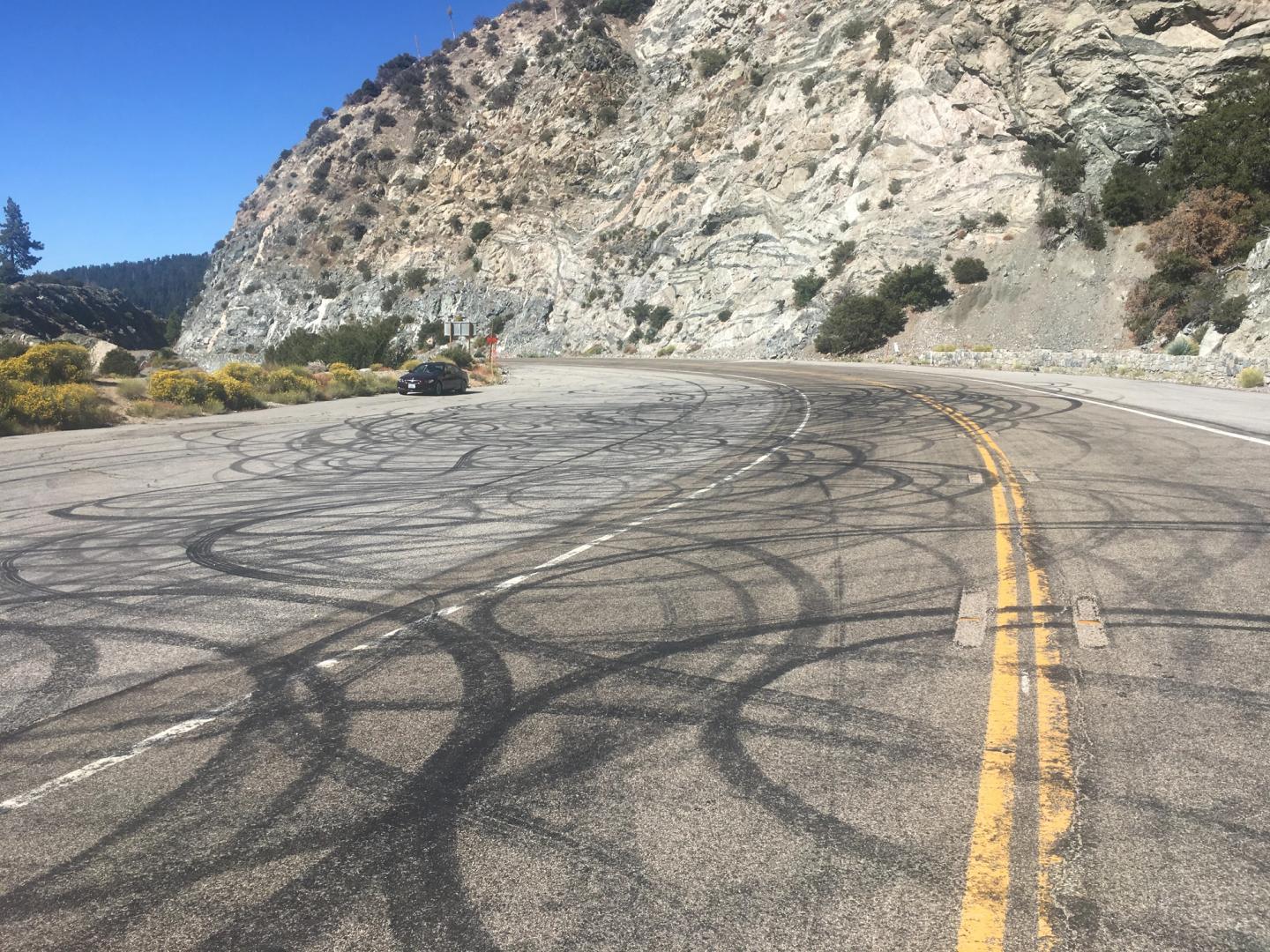 Having fun with your car is one of the great joys of life. And because you’re reading this, you understand this more than many.

Have you ever heard of hooning? Perhaps you’re more familiar with the term hoonigan, popularized in part by professional rally driver Ken Block. The term “hoon” originated in Australia and New Zealand around 2004, and it’s likely a combination of old Australian colloquialisms meaning “fool” or one who lived off immoral earnings (like prostitution) and possibly a contraction of Houyhnhnm, a fictional race of intelligent horses in satirist writer Jonathan Swift’s Gulliver’s Travels.

Prostitutes, fools, and horses aside, the modern-day hoon is someone who deliberately drives in a reckless or antisocial manner, usually to provoke a reaction from onlookers, according to Wikipedia. An exact definition of hooning is hard to come by, but it encompasses behaviors like illegal street racing; burnouts; donuts; drifting; unnecessary speed, acceleration, noise, or smoke; and even cruising, according to Hooning Offenders and Offences: Who and What Are We Dealing With?, a 2004 academic paper by Nerida Leal, Barry Watson, and Mark King.

By 2004, hooning had become a big enough public safety issue in Australia and New Zealand that major antihooning legislation was introduced. Illegal street racing could take the form of informal drag races between two strangers at a traffic light or highly organized, late-night, quarter-mile events attended by hundreds. According to Leal’s paper, hoons are typically young males aged 16 to 25, although female attendance is increasing, and more than a quarter of hoons are over the age of 25. They’re often motoring enthusiasts, owners of modified vehicles, and young drivers in general.

Accurate crash statistics are hard to come by because of police reporting ambiguities and underreporting. About four percent of official hooning offenses mention a crash, according to the Centre for Accident Research and Road Safety–Queensland (CAARS-Q)’s 2012 fact sheet. But there’s no doubt that hooning poses huge risks for drivers, passengers, bystanders, and property because vehicles often lose traction and contact with the road, and drivers can lose control of their cars in live traffic.

Of course, what happens in Australia and New Zealand isn’t unique to these lands down under. Automotive adventures in our younger years are something we all remember as drivers and passengers, rites of initiation we started working diligently on as soon as we could get licenses. And when the world went on lockdown during the coronavirus pandemic, the roads emptied, law enforcement was hardly anywhere to be seen, and youths got frustrated by social isolation. This created the perfect recipe for an exponential rise in hooning—the tire marks and donut circles we see in today’s roads don’t lie.

Every hoon knows that the best way to keep doing what they love is not to get caught. So, every year, millions set off for out-of-the-way places where they can sneak fun, burn rubber, and form bonds over speed, sport, modified machines, and one-upmanship.

While yours truly is not quite a certified hoon, I’ve enjoyed my share of automotive fun over the years in undisclosed locations. Since becoming a traffic safety professional, I’m not the inveterate speeder I used to be, but I do admit to a lust for canyon carving in my 2009 E90 335i when the opportunity presents itself. In September 2019, I made a rare trip to Los Angeles, and fellow Roundel columnist Chris Wright suggested the Angeles Crest Highway as a place to play—66 gloriously sinuous miles over the San Gabriel Mountains.

One would never guess that the dirty, congested, endless sprawl of one of North America’s biggest cities is just an hour away from this glorious, peaceful California Scenic Byway. Reaching nearly 8,000 feet at its highest point, this highway’s vista above the LA Basin is beyond breathtaking. So is the driving. Except that the most annoying rocks in the world like to greet you right in the middle of the road just after a hairpin turn. They’re not very big, but they sure are hard, flinty, and sharp, openly mocking you and daring to slice up your underbody hanging barely four inches above the asphalt. There also appears to be a notable lack of guardrails anywhere, so your reflexes, depth perception, and steering had better be accurate on these sheer cliffs.

Still, my capable machine and I had enormous fun as we dove into corners and accelerated hard out of turns—just what she and her twin turbos were born for. On that clear, sunny, gorgeous weekday morning, practically no one else was out on the road, which made it even better. And the few vehicles and motorcycles that were—well, they were out there to have fun too.

Evidence of others’ adventures was in plain sight at all the major turnouts—as you can see in the photo above. In fact, Angeles Crest Highway has been the scene of many spectacular crashes, both in real life and in movies filmed there. Casualties sometimes aren’t discovered for days or even weeks if they swerve off the road and down into the steep ravines.

At one point, I pulled off into a turnout to snap some photos of the spectacular view. Immediately, off to the side, I spotted a most curious memorial that was conspicuously decorated with familiar roundels. It had obviously been newly put up and created with meticulous attention to detail, with freshly painted white boards, a metal plaque, and carefully arranged American flags, rocks, a bottle of whiskey, and other objects. The little plaque read: 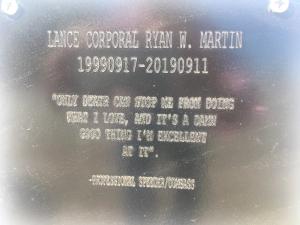 “Only death can stop me from doing

what I love, and it’s a damn

Because this memorial was sited right on the edge of a cliff against an incredible mountain backdrop, I assumed right away that whoever was being commemorated had perhaps gone off this very spot. Looking at the date on the plaque, I realized that LCpl. Martin had died just eight days prior. There was something about this little memorial that deeply moved me—perhaps just that this person had obviously been so loved by his friends that they cared enough to put this much effort into celebrating his life in this remote place.

I looked up to the mountains and clouds beyond and wondered if he’d met his end with his car suspended in those few moments of final, terrible space before plunging down to be at one with the rocks and brush below. Peering over the edge, I couldn’t see any evidence of a recent disturbance, but the poignancy overtook me and left me feeling pretty somber for the rest of my drive down the mountains.

Researching later, I discovered that LCpl. Martin had not met his untimely end on the edge of heaven up there on that peak. Instead, eight days earlier, at around 6:45 AM, he’d been on an Interstate 5 onramp near San Diego, lost control of his BMW motorcycle, and slid across the roadway. A Ford F-150 pickup truck then accidentally struck and ran over him, pinning him underneath. The California Highway Patrol and other first responders lifted the truck off his body, but he was pronounced dead at the scene, just six days shy of his twentieth birthday. He was from Lexington, South Carolina, and had served as a Marines helicopter mechanic at Camp Pendleton.

The Thompson Funeral Home obituary in South Carolina later listed LCpl. Ryan as deeply religious, a young man who loved bonfires, S’mores, kayaking, rugby, photography, weapons, and motorcycles most of all. His sister Jessica had helped him rebuild a 1984 Honda CB450, and he considered her a mentor. He had “lived his life to the fullest, he loved to ride … he’d ride to the forest, mountains, beaches, or to visit friends.”

I need to stress here that the cause of LCpl. Ryan’s motorcycle crash is unknown, and so we should not assume that he was being reckless or riding dangerously that fateful morning. Nor do we know for sure that he ever hooned in the mountains he so loved and where his buddies honored his memory. But the words chosen for his plaque sit uneasily, a keen reminder of that very fine line indeed between enjoyment and danger, freedom and responsibility, and euphoria and sorrow. 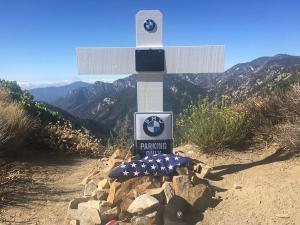 Photos by the author.